Maybe my spinal arthritis developed symptoms in early 2020. I had xrays and a scan to discover what I had already been told. It was arthritis. The spinal problem meant something different to pain. It was very bad in the mornings between 9 and noon as I showered, dressed and went out for brunch. I was often walking along the street with my head falling forward. I had to consciously try to keep my head erect. The more I stood, the worse it became and I was always looking around for a seat with back to give me some respite. Driving was a nightmare and caused me great pain. In spite of R's protests about one handed driving on freeways, it was best to let my left arm rest down low. I did find ways to ameliorate the pain. At times in the mornings I struggled to even eat, such the effort it was. It was an effort just to move my jaw to chew.

I received five visits to a physiotherapist in 2021 at no cost to me from our health system as a sufferer of a chronic disease. She gave me massages and helpful advice. She prescribed exercises to strengthen muscles to support my spine and I think they helped and I am still exercising.

Painkillers like strong Panadol were like lollies and I didn't want to become addicted to them as Mother is. I used them when I was at my worst but just did not seem to help. After twenty minutes of showering dressing and making myself presentable for the day, most days I would have to sit in an armchair to relieve the discomfort. I could then stand and get my head up.

Was it four weeks ago we were dog sitting for Sister. Nothing had changed. When we returned home the really bad morning neck problems kind of disappeared to be replaced with with some kind of all over spinal pain.

Oh joyous news. For whatever reason, I am pretty well pain free now. There is minor pain but whatever has happened, I am so happy. Highrise grumpy arse has even noticed how my posture has improved and I am moving better. My walking speed has improved too.

But is this normal? Some of you I know suffer from arthritis. Is this a temporary reprieve as you have experienced?

at October 21, 2022
Email ThisBlogThis!Share to TwitterShare to FacebookShare to Pinterest
Labels: Medical, Personal

Up above the caravan park were some buildings. You can see an old chimney peaking above a modern building on stilts. The old mansion's v... 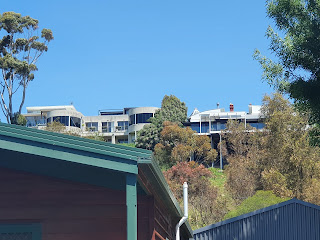 Andrew
I am retired and I live with my long time male partner in a high rise in inner south eastern Melbourne.